Mazara was the first city conquered by the Arabs in 827, and with them came the couscous, a dish of integration and peace among peoples, which arrives in the Trapani province thanks to immigrant workers from the Maghrebi coasts. From Mazara del Vallo, passing through Marsala, to San Vito lo Capo, the local couscous has now become a regional dish, also technically distinct from the original one. In addition to replacing meat with fish, in fact, the other substantial difference is the way of incocciare il cous cous, i.e. to work semolina and water by hand, obtaining coarser couscous grains in Sicily compared to the Maghrebi use.

The local version of this dish requires specific tools, including the couscous pot, in dialect pignatta du cùscusu, a sort of enamelled terracotta strainer, with a flat bottom and equipped with a lid to be combined with a pot with high edges capable of host it, to allow steaming of semolina’s grains. Another typical tool is the mafarradda, a terracotta container with curved walls and a flat bottom, in which the couscous grains are shelled.

The different Trapanese recipes of the dish are quite like each other; at the base there is always a fish soup, with variations mainly related to the size of the semolina grains. 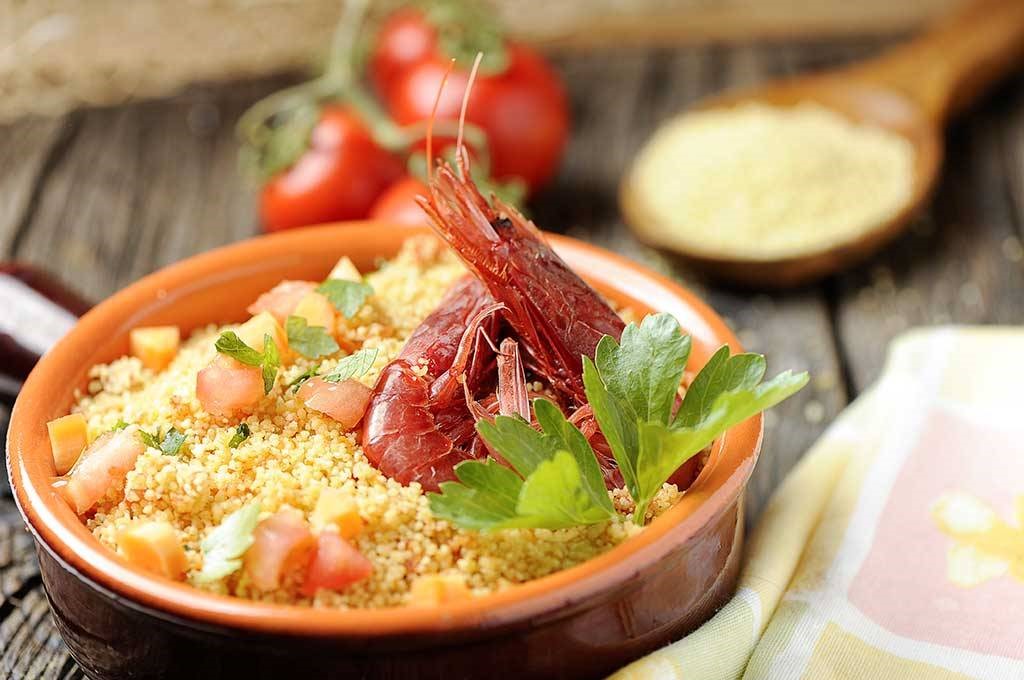 The recipe of Mazarese couscous

Put three to four handful of semolina into amafaradda. Add a few drops of water to make the couscous begin to aggregate, that is, to turn into grains. This operation is easier if you use your fingertips: you have to massage semolina with circural movements.
Add water and semolina until you get grains of about two millimeters in diameter, remembering that it is better to prepare small quantities of couscous at a time.
Steam for about an hour and a half in the specialcouscous pot. The holes in the pan are covered with onion and bay leaves to ensure that the semolina is cooked without direct contact with the steam. This is then sealed on the outside with a simple dough made of water and flour, so that the steam and flavors do not come out. Add flavors such as cinnamon, onion, garlic, celery, pepper, bay leaves, and possibly the fish heads to the cooking water. Leave the couscous to rest for about an hour.

Aside, prepare the fish soup: brown the onions, 10 garlic cloves and chopped parsley with extra virgin olive oil. Add the chopped almonds and peeled tomatoes. Add water, then salt, pepper and chili pepper, the soup fish and simmer for at least an hour. Remove the bones from the fish and strain the broth.  The fish is served on the couscous dish, along with a few slices of fresh lemon and some parsley. Aside also serve the broth and use it to wet the couscous to taste.

The Mazarese couscous pairs wonderfully well with our rosé from Nerello Mascalese, Rosa dei Venti, or with a Grillo wine able to age, like our Kheirè.